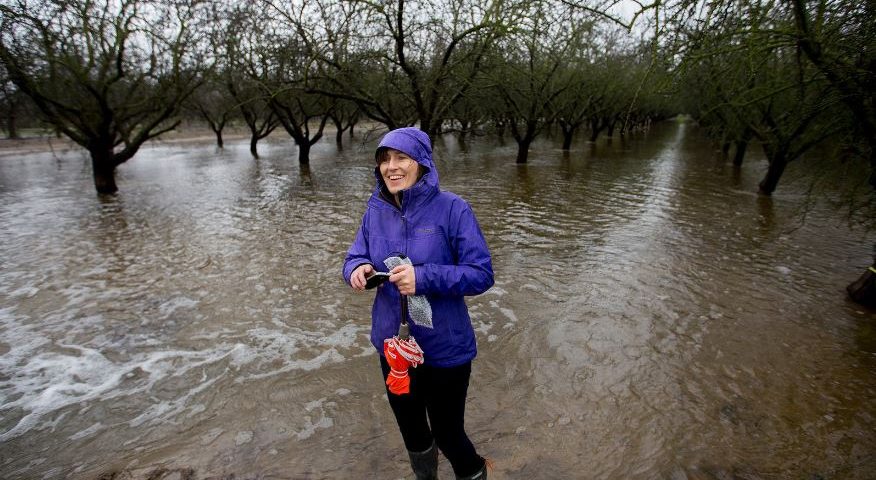 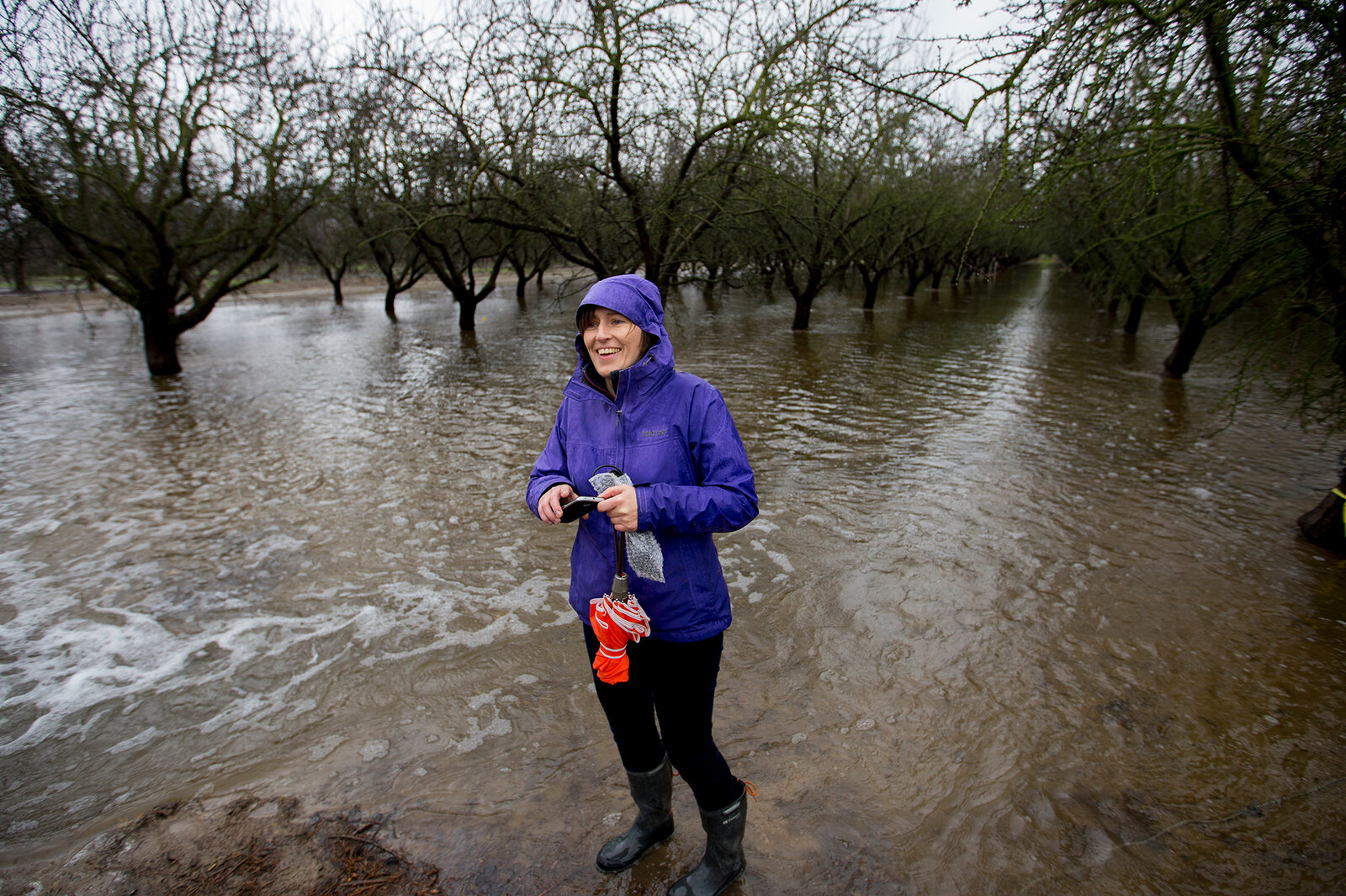 Helen Dahlke, a scientist from the University of California, Davis, stands in an almond orchard outside Modesto that’s being deliberately flooded. This experiment is examining how flooding farmland in the winter can help replenish the state’s depleted aquifers. Joe Proudman/Joe Proudman / Courtesy of UC Davis

Six years ago, Don Cameron, the general manager of Terranova Ranch, southwest of Fresno, Calif., did something that seemed kind of crazy.

He went out to a nearby river, which was running high because of recent rains, and he opened an irrigation gate. Water rushed down a canal and flooded hundreds of acres of vineyards — even though it was wintertime. The vineyards were quiet. Nothing was growing.

“We started in February, and we flooded grapes continuously, for the most part, until May,” Cameron says.

Cameron was doing this because for years, he and his neighbors have been digging wells and pumping water out of the ground to irrigate their crops. That groundwater supply has been running low. “I became really concerned about it,” Cameron says.

So his idea was pretty simple: Flood his fields and let gravity do the rest. Water would seep into the ground all the way to the aquifer. 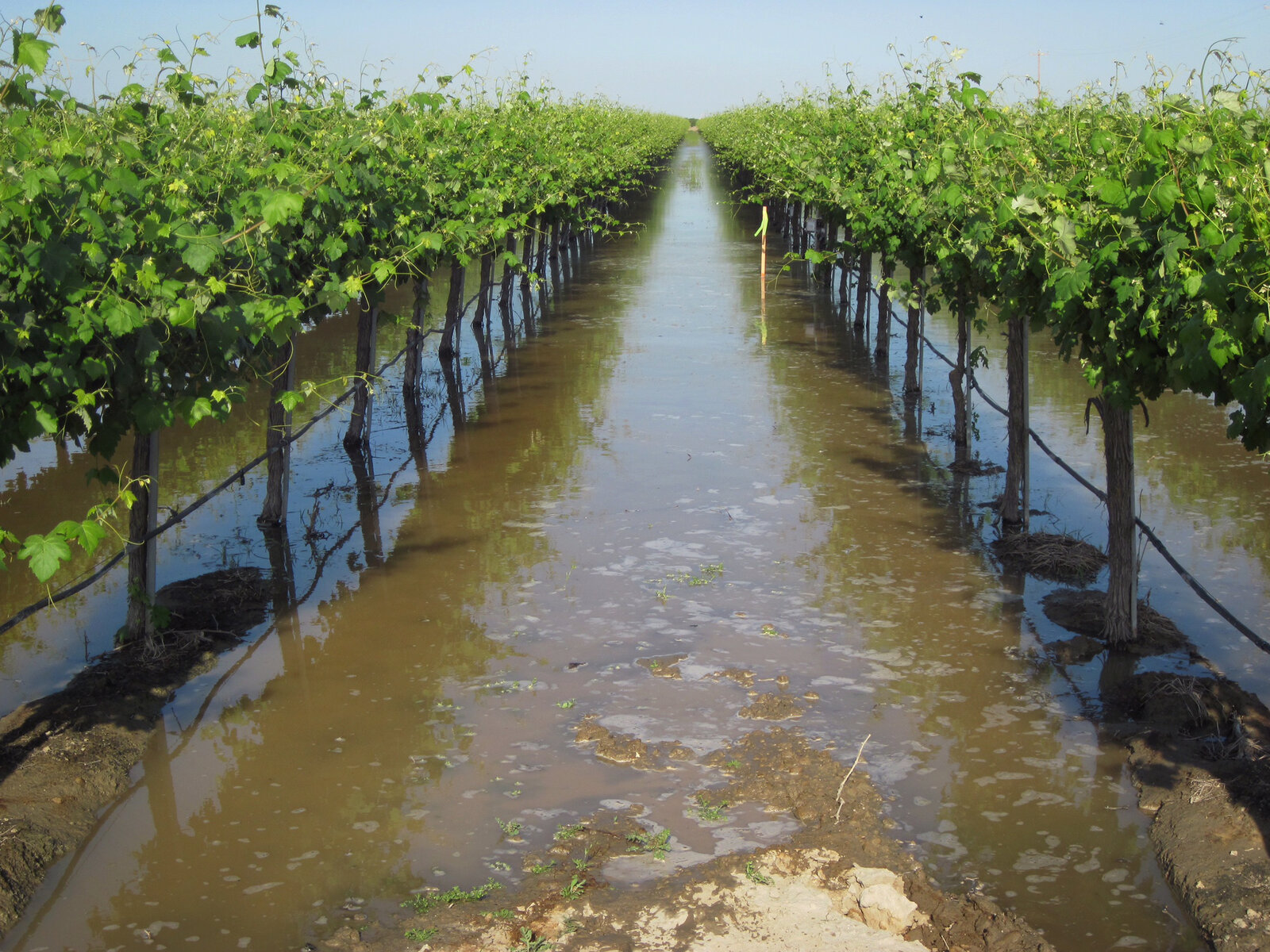 Don Cameron, general manager of Terranova Ranch, flooded his grapevines with floodwaters from a branch of King’s River, southwest of Fresno, Calif. Courtesy of Don Cameron

The idea worked. Over four months, Cameron was able to flood his fields with a large amount of water — equivalent to water three feet deep across 1,000 acres. It all went into the ground, and it didn’t harm his grapes.

These days, Cameron’s unconventional idea has become a hot new trend in California’s water management circles — especially this week, with rivers flooding all over the state.

“This is going to be the future for California,” Cameron says. “If we don’t store the water during flood periods, we’re not going to make it through the droughts.”

Helen Dahlke, a groundwater hydrologist at the University of California, Davis, is working with a half-dozen farmers who are ready to flood their fields this year. “We have test sites set up on almonds, pistachios and alfalfa, just to test how those crops tolerate water that we put on in the winter,” she says.

There are two big reasons for these experiments.

The first is simply that California’s aquifers are depleted. It got really bad during the recent drought, when farmers couldn’t get much water from the state’s surface reservoirs. They pumped so much groundwater that many wells ran dry. The water table in some areas dropped by 10, 20, or even 100 feet. Aquifers are especially depleted in the southern part of California’s Central Valley, south of Fresno. Flooding fields could help the aquifers recover.

The second reason to put water underground is climate change.

California has always counted on snow, piling up in the Sierra Nevada mountains, to act as a giant water reservoir. Water is released gradually as the snow melts.

But because of a warming climate, California now is getting less snow in winter, and more rain. The trend is expected to intensify. But heavy rain isn’t as useful because it quickly outstrips the capacity of the state’s reservoirs and just runs into the ocean. Meanwhile, the state gets very little rain during the summer, when crops need water.

“We really have to find new ways of storing and capturing rainfall in the winter, when it’s available,” says Dahlke.

There’s no better place to store water than underground. Over the years, California’s farmers have extracted twice as much water from the state’s aquifers as the total storage capacity of the state’s dams and man-made lakes. In theory, farmers could replace that water.

Peter Gleick, a water expert and co-founder of the Pacific Institute, says that after winter storms, there is enough water available to recharge those groundwater aquifers.

The hard part, he says, will be getting the state’s farmers and irrigation managers to go along with the plan. Because it will require flooding hundreds of thousands — and possibly millions — of acres.

And Gleick says, even if this large-scale flooding can be accomplished, it won’t be enough, by itself, to protect groundwater supplies. It will have to be accompanied by strict limits on how much water farmers can pump from aquifers. Groundwater — which until recently was almost completely unregulated — will have to be managed so that water is there when farmers really need it, when the rains don’t fall. 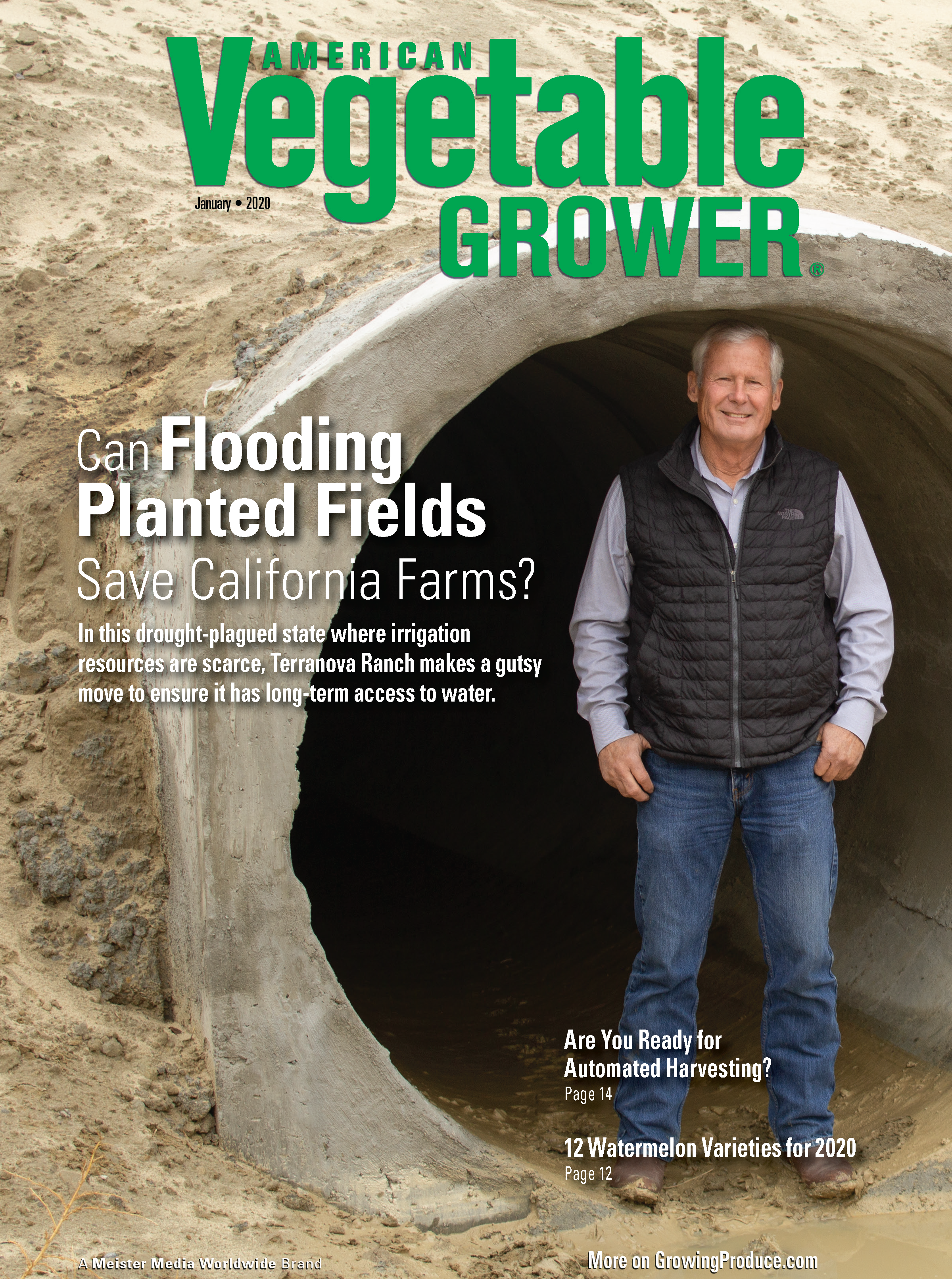 Five Innovative Ag Practices that are Changing the World